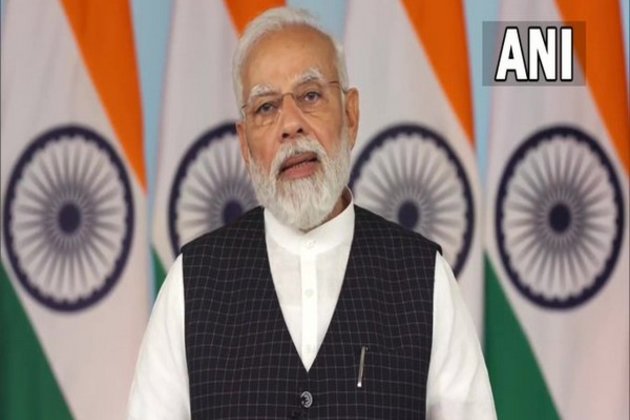 New Delhi [India], May 16 (ANI): Prime Minister Narendra Modi will lay the foundation stone for the construction of a unique centre for Buddhist Culture and Heritage within the Lumbini Monastic Zone during his official visit to Nepal's Lumbini on Monday on the occasion of Vaishakha Buddha Purnima, informed the Ministry of Culture.

At Lumbini, the Prime Minister will visit the sacred Mayadevi temple to offer prayers. Prime Minister will also deliver an address at a Buddha Jayanti event organized by the Lumbini Development Trust under the aegis of the Government of Nepal, said the ministry in its press release.

The construction of the unique "India International Centre for Buddhist CultureHeritage" with a universal appeal will be undertaken by the International Buddhist Confederation (IBC), India under the auspices of the Lumbini Development Trust with the financial support of the Ministry of Culture, Government of India.

International Buddhist Confederation is a grantee body under the Ministry of Culture. The Buddhist Centre will be the first "Net Zero Emission" building in Nepal.

Also, on the occasion, the Ministry of Culture in collaboration with the International Buddhist Confederation (IBC)is hosting a colourful programme for the Vaishakha Buddha Purnima Divas celebrations in New Delhi. The highlight will be the screening of a film on Prime Minister Narendra Modi's foundation-stone laying ceremony, earlier in the day for the Centre for Buddhist Culture and Heritage at Lumbini, Nepal.

The event will start at 2:00 pm with chanting from various Buddhist sites played on the screen.

The significance of the timing of the Prime Minister's visit to Nepal is to coincide with the inauguration of the Lumbini Buddhist Centre with the Holy Vaishakha Buddha Purnima Divas. The day is recognized as the thrice blessed day that marks the Birth, Enlightenment and Mahaparinirvana of Lord Buddha.

While Buddha was born in Lumbini in Nepal, he attained enlightenment in Bodhgaya in Bihar, preached his first sermon at Sarnath and attained Nirvana in Kushinagar, in Uttar Pradesh.

Lumbini is the holy place where according to Buddhist tradition, Queen Mahamayadevi gave birth to Siddhartha Gautama at around 623 B.C. Lord Buddha, was born in the famous gardens of Lumbini, which soon became a place of pilgrimage.

Among the pilgrims was the Indian emperor Ashoka, who erected one of his commemorative pillars there. The site is now being developed as a Buddhist pilgrimage centre, where the archaeological remains associated with the birth of the Lord Buddha form a central feature.

Some of the other Viharas and Monasteries in the area are Myanmar's Golden Temple, Tara Foundation Temple, The Sri Lanka Monastery, the Korean Temple (Dae Sung Shakya), the Cambodian Monastery and the Vietnamese Phat Quoc Tu Temple.

Lumbini is one of the holiest and most important places in Nepal as a result of which it was included in the list of World Heritage areas by UNESCO.

The International Buddhist Confederation (IBC), India- with its headquarters in New Delhi, was formed in 2013 as an international Buddhist umbrella body to serve as a common platform for Buddhists worldwide. It has the honour of being instituted under the patronage of the Supreme Buddhist religious hierarchy.

The aim is to create a platform for various Buddhist organisations and traditions worldwide to preserve, propagate and promote shared Buddhist values and principles. The objective is also to find shared solutions to global problems.

The IBC has been actively involved in engaging Buddhist organisations in Nepal and has a strong relationship with several senior Buddhist monks. The Prime Minister's visit and the building of an Indian Centre within the Lumbini Monastic complex will further strengthen the bonds through a shared Buddhist heritage and legacy. (ANI)