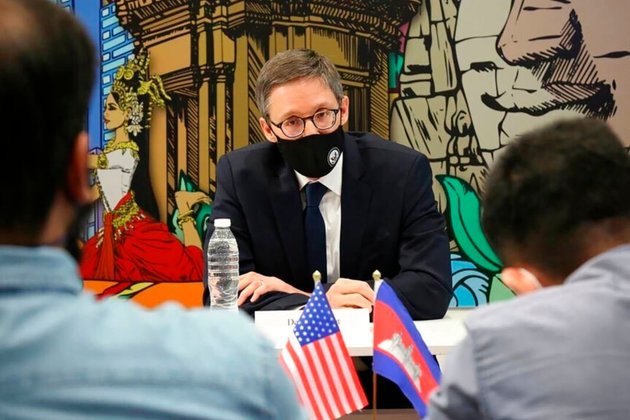 WASHINGTON - Sixteen months after President Joe Biden took office in January 2021, rancor defines the U.S.-Cambodia relationship. Yet Cambodian Prime Minister Hun Sen, along with leaders from other Southeast Asian nations, will be attending the U.S.-ASEAN Summit in the White House this week, his presence amplified because Cambodia is the chair of the Association of Southeast Asian Nations.

On Feb. 1, the Lunar New Year, Jonathan Turley, the political/economic chief of the U.S. embassy in Cambodia, said the U.S. sought a 'peaceful, prosperous and independent' Cambodia - and then blasted the state of democracy in Cambodia and its ever-closer ties with China.

'As a friend and a partner to Cambodia, we naturally have concerns when we see Cambodia moving away from that, when we see a government at every level is dominated by just one party, when peaceful citizens are arrested and imprisoned just for expressing their views, when corruption is unchecked and the powerful act with impunity, and when the Kingdom's hard-won independence and sovereignty are being eroded,' Turley told VOA Khmer.

In a thinly veiled reference to China and its suspected involvement at the Ream Naval Base in Sihanoukville province, Turley said the U.S. is 'very committed to the kingdom's sovereignty. So we are naturally concerned when we see Cambodian sovereignty being eroded, when we see a growing foreign military presence, and when foreign companies contribute to or are involved in corruption violating lands, laborers and environmental regulations.'

While the U.S. criticizes Cambodia's backsliding on human rights and democracy, analysts say China's influence is driving U.S. strategy in the region, prompting the Biden administration to take a frank approach to Phnom Penh, perhaps Beijing's closest ally in the region.

'Because the U.S. continues to rigidly view Cambodia through the lens of its intensifying competition with China, the mood among the U.S. foreign policy community has been consistently negative, leading to a deeply entrenched misunderstanding about the nature of Cambodia's foreign policy and its position vis-à-vis China and the U.S.,' said Bong Chansambath, a lecturer in international relations at the Royal University of Phnom Penh.

'The misguided belief that Cambodia is China's proxy is counterproductive and detrimental to the foreign policy interests of Cambodia, the U.S. and their shared ties,' Bong Chansambath said.

China's embassies in Washington and Cambodia did not respond to VOA Khmer's requests for comment on Beijing's relationship with Cambodia.

However, in an online meeting Sunday, Chinese Foreign Minister Wang Yi told his Cambodian counterpart that 'the Chinese side also believes that the world should listen more to Asia's voice, respect its position and draw on its wisdom,' according to Xinhua, China's state-affiliated news outlet. '... While China welcomes countries outside the region to play a positive and constructive role in promoting peace and development in the region, it does not accept any action undermining regional peace and stability or solidarity and cooperation.'

Though Biden has promised to double down on U.S. ties with Southeast Asia, Bong Chansambath noted, U.S. policy on Cambodia is essentially a continuation of Trump administration policy, which spoke out about the decline of democracy and sanctioned key Hun Sen allies.

In November, the Biden administration sanctioned two senior Cambodian military officials over their role in China's development in and around Ream Naval Base, which the U.S. worries is part of a longer-term plan for a Chinese military presence on Cambodia's coast.

In June 2021, when the U.S. sought to clarify Beijing's relationship to the base, Foreign Ministry spokesperson Wang Wenbin said China and Cambodia enjoyed a 'traditional friendship' and were 'comprehensive strategic and cooperative partners,' according to The Associated Press.

It's not just the U.S. that believes Phnom Penh is increasingly moving into China's corner. In April, the Taipei-based Doublethink Lab ranked Cambodia as the country 'most exposed' to Chinese influence, in an index that looked at levels of Chinese influence in 36 countries worldwide, in areas such as military, politics, academia and technology.

The Cambodian government's chief spokesperson, Phay Siphan, said neither China nor America is welcome to establish a military presence in the country. 'Cambodia has learnt full well in its history about the consequences of both officially or unofficially hosting foreign military presences that sent Cambodia into wars,' he told VOA Khmer in February.

Phay Siphan said it would be 'unacceptable' to conclude that the volume of Chinese investment and presence in Cambodia meant the Phnom Penh government 'sold off its sovereignty' to Beijing. He said the U.S. and Cambodia have struggled to understand each other since the 1950s, when Cambodia won independence from France.

Hun Sen has proven to be an adept diplomat despite his autocratic approach at home. He promises enough reforms to keep Western donors engaged and throttles down repression when foreign or domestic pressure mounts. But there is concern that the latest turn toward China - along with his success in curtailing political opposition over the past decade - means a more sustained period of authoritarianism may be in store.

Phay Siphan said Washington needs Phnom Penh to get anything done with the ASEAN bloc. Apart from being a major trading partner of the U.S., the region has a booming population and is strategically placed on the South China Sea, a key location in the geopolitical struggle between the U.S. and China.

And despite its tough talk about U.S. interference in its affairs, Cambodia has indicated a desire to mend fences. Since 2019, the Cambodian government has hired at least three U.S.-based lobbying firms in an effort to improve ties with Washington and attract American investment.

The U.S. is a crucial export market for Cambodia, particularly its garment sector. The two-way trade in goods rose to about $9 billion in 2021, up from $6.9 billion in 2020, and is on pace to increase again this year. The U.S. has yet to renew preferential trade status for Cambodia since it lapsed last year.

Kosal Path, who chairs the master's program in international affairs and global justice at the City University of New York, disagreed that the China factor was the 'defining issue' between Phnom Penh and Washington. The Biden administration's continued push to uphold democracy and human rights was increasingly at odds with Hun Sen's rule, he said.

The CPP has ruled a de facto one-party state since 2017 after dissolving its chief rival, the Cambodia National Rescue Party, and grabbing all 125 parliamentary seats a year later in an election critics called a 'sham.' Intimidation and legal harassment of politicians and opposition parties is increasing ahead of local elections, to be held on June 5, and the next national parliamentary elections, set for mid-2023.

'Such different political and ideological values will continue to be barriers to a closer relationship between the U.S. and Cambodia under the leadership of Prime Minister Hun Sen and the ruling Cambodian People's Party,' Kosal Path told VOA Khmer.

He added that the Cambodian government's recent efforts to woo investments and trade pacts from South Korea, India and Japan indicate Phnom Penh's 'concerted efforts' to 'diversify economic relations' and 'reduce exposure to the Sino-American rivalry.'

'The upcoming summit can be an opportunity for Cambodia as the ASEAN chair to reset its relations with the United States by focusing on areas of common interests including reaffirmation of rules-based international order, the centrality of ASEAN in peaceful resolution of conflict in the region, trade and investment, and other low-politics areas, especially education, science and technology, climate change,' Kosal Path said.

Derek Grossman, a senior defense analyst with the RAND Corporation, said to challenge China in the region, the U.S. should reconsider its values-based policy toward Cambodia and neighboring Laos by following its own approach to Vietnam, where relations have warmed despite the communist regime.

'I also think the Biden administration has concluded that - perhaps prematurely - that Cambodia and Laos are both firmly within China's strategic orbit and not in any way up for grabs in the U.S.-China competition,' Grossman told VOA Khmer, adding that there is a need to 'reset' bilateral U.S.-Cambodia relations, although Hun Sen 'is not easy to deal with.'

'I think we are going to find out a lot more when the ASEAN leaders ... visit the White House in terms of how the U.S. views Cambodia's role in ASEAN,' Grossman said.

Still, he said, there is little hope of a major reset as long as Hun Sen remains in power. That may change if and when the prime minister's son, Hun Manet, a West Point graduate, takes charge, he added. The CPP endorsed his eventual ascension during an extraordinary party congress late last year.

However the U.S. chooses to deal with Cambodia, the ruling party isn't going to change soon, Bong Chansambath emphasized.

'Whether or not the U.S. is comfortable with the current political status quo in Cambodia, it is up to U.S. policymakers to decide,' he said. 'What I may say here is that the CPP is currently the most established and predominant political force in Cambodia and will continue to be so in the upcoming years, if not decades.'