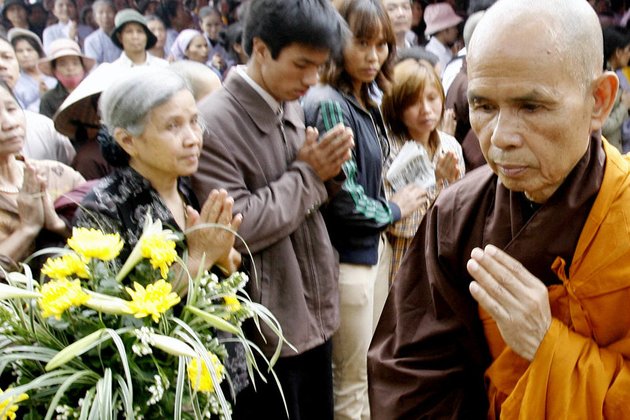 Thich Nhat Hanh died peacefully in the Tu Hieu Temple in Vietnam, his Zen teaching organization, Plum Village announced on Saturday. The influential Buddhist monk, who was born in 1926, suffered a stroke in recent years, which left him unable to speak or preach. He then expressed a wish to return to the temple where he had been ordained decades ago, and was allowed to spend his final years in his native country.

The monk, often referred-to as the second most prominent Buddhist person after the Dalai Lama, spoke seven languages and spent a large part of his long life in the West. In the early 1960s he lectured in the US at Princeton and Columbia universities, and then lived in France. The Zen master established many retreats and meditation centers globally, including in the US, Australia, Germany and Thailand. His Plum Village center in France is the largest Buddhist retreat in Europe.

Having successfully combined Buddhist ideas with elements of Western psychology, the Vietnamese preacher wrote over a hundred books and inspired dozens of communities, including many online groups. Some of his most popular publications include 'The Miracle of Mindfulness' and 'You Are Here,' in which he taught followers to be present in the moment and to pay attention to breathing.

He is also credited in Western media with helping turn Buddhist meditation practices into a multibillion-dollar wellness industry.

While his practices earned him millions of followers, including celebrities, Thich Nhat Hanh is also known as a promoter of peace and a social-change advocate during the Vietnam war. His 'Engaged Buddhism' movement encouraged individual action to help communities in need.

Having preached compassion and nonviolence, he appealed for peace in his country upon traveling to the US and Europe, and was eventually banned in Vietnam, having to live in exile for some 40 years.