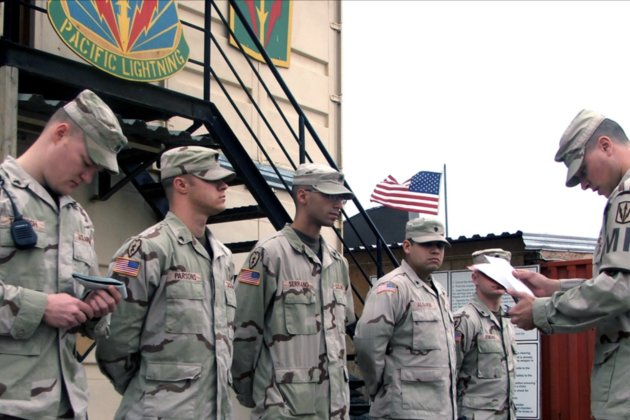 KARSHI KHANABAD, UZBEKISTAN - Residents living near Karshi-Khanabad harbor have fond memories of the American soldiers who served at the Uzbek air base widely known as K2 between 2001 and 2005, describing the period as one of their happiest times. But for many of the Americans, lingering affection for the residents is outweighed by persistent debilitating ailments that they attribute to toxic and radioactive waste at the base.

'The American period was a wonderful time,' said Oysaot Toparova, a resident now in her late 70s who served for many years as a politician in the adjacent village of Khanabad. 'U.S. military visiting our schools, meeting the community, we loved it. I think Uzbekistan and the U.S. got the best out of that cooperation.'

Residents say they are perplexed by the American complaints. They note that thousands of Uzbek air force members and civilian workers still work at the site, and about 10,000 people live nearby.

Mark Jackson, board chairman of the Stronghold Freedom Foundation, which represents retired and active American military personnel, also describes 'wonderful memories of Uzbekistan.' He says he interacted with locals daily, went to homes, enjoyed tea and meals, and traveled across the country. He is still fascinated with its history and culture.

But, he told VOA, his time at K2 has left him with another legacy, one of relentless illness and pain that he blames on environmental hazards left over from the Soviet era in Uzbekistan, a connection he has found frustratingly difficult to substantiate.

'I cannot provide you with hard facts,' he said in an interview. 'The facts I have are my body and the tombstones. We were ignored for 20 years until we made enough noise to force Washington to acknowledge that people went to a place that the government itself admitted in 2001 and 2004 was environmentally degraded and polluted.'

The membership of his organization includes 'some profoundly ill people,' Jackson said.

'Wars are fought with bullets and bombs. This is a very slow-moving bullet, moving through my body. I'll give myself an injection in the belly every day for the next two years, because I have the bones of an 80-year-old woman, on top of a dying thyroid and a gastrointestinal tract that mimics that of an 80-year-old man.'

Recently revealed U.S. documents confirm that the Pentagon suspected K2 could have hazardous chemicals left over from its days as a Soviet military facility. Now, Johns Hopkins University is conducting an 18-month long longitudinal epidemiological study among K2 veterans, following on an executive order by former U.S. President Donald Trump.

File - Photo of US soldier guarding shipment of Afghan election ballots in Karshi-Khanabad Air Base in Uzbekistan in 2004.

But during a recent visit to Khanabad by VOA, residents said they were perplexed by the American complaints. They noted that thousands of Uzbek air force members and civilian workers still work at the site, and about 10,000 people live nearby.

'We live next to the base,' said Dostmurod Odayev, a community leader in his 60s who describes K2 as an integral part of life in the region. 'Our people work there. We have military residents serving there. I've never heard of anyone getting sick because of environmental issues or radiation at K2.'

Zoyir Mirzayev, who until last month governed the Kashkadarya region, which includes the air base, told VOA that local authorities had not found evidence that would back up Jackson's complaints.

'We are aware of these American claims,' he said. 'We looked at environmental and health data but found nothing of concern and don't believe K2 has radiation or deadly chemicals.'

Odayev pointed out that the area around the base is prime farmland, and families were wrapping up the harvest beneath the constant roar of aircraft when VOA visited. While access to the base was not permitted, there was no visible evidence of a toxic environment amid the scent of fresh roses blooming in winter and livestock enjoying the surrounding pastures.

Ovul Nazarov, 61, says the Americans 'seemed to enjoy their time in Uzbekistan, so these claims sound strange to us,' he said.

Ovul Nazarov, 61, said 'they seemed to enjoy their time in Uzbekistan, so these claims sound strange to us,' he said.

Quvvat Khidirov, another retired Uzbek officer, with nearly 30 years of service at K2, also does not understand 'American complaints.'

'I worked in a really old building at K2 for more than two decades. If the site were toxic with all those chemicals we've been hearing about from American colleagues, I should know many sick people here, but I don't. I'm in good health myself.'

Quvvat Khidirov, a retired Uzbek officer, with nearly 30 years of service at K2, also does not understand 'American complaints.'

Misqol Polvonova, 62, calls herself a K2 neighbor. She raised six children across the street from the base. 'We used to watch American jets flying low. You know, we spend a lot of time outside. We sleep in the open air all summer. All my children are healthy. I have 15 grandkids.'

Such accounts do not convince Jackson, who doubts that Uzbeks can speak freely about an issue as sensitive as hazardous waste at a strategic military facility. His group has set up a private Facebook page where Uzbeks are invited to share their experiences and connect with American K2 veterans.

'Maybe they know somebody who died of a very strange cancer or brain disorder, or maybe they have chronic gastrointestinal issues or some of their other organs are failing, or they have anemia. And these have just become part of life, as they're part of mine,' he said.

Jackson argued that without the results of the ongoing longitudinal study as well as testing of air and soil, an objective review of historical records, and permission for scientists to report without interference, Uzbekistan has no credibility.

He said the point is not to bring shame upon Uzbeks. 'The shame belongs to the Soviets who destroyed the environment, dumping petroleum products and radiation and asbestos into the soil.'

Since Jackson's movement started, some things have changed. The U.S. Department of Veterans Affairs has surveyed military exposures on K2, outlining potential threats including jet fuel, which 'may have occurred as a result of a leaking Soviet-era underground jet fuel distribution system,' and volatile organic compounds, particulate matter and dust.

The VA also mentions depleted uranium, noting that 'Soviet missiles were destroyed there, contaminating some areas of surface dirt with low-level, radioactive, depleted uranium.' Asbestos and lead are listed as having been present at K2 structures while Americans were there.

Stronghold Freedom Foundation highlights that 15,000-16,000 military personnel were deployed to K2, with about 1,300 service members present at any time. The group argues, based on its findings, findings (((https://strongholdfreedomfoundation.org/k2-facts/#documents-facts))) that at least 75% of those deployed only to Uzbekistan have developed serious illnesses.

Yet veterans complain of 'endless paperwork' required to get proper treatment. They want recognition that their illnesses are connected to their service in K2.

That and other legislative efforts in 2021 did not move forward, but the veterans still hope for congressional action. They note that their cause has support from lawmakers as ideologically opposed as Democratic Senator Kirsten Gillibrand and Republican Senator Marco Rubio.

Gillibrand and Rubio 'could not be farther apart politically yet stood together on K2. They know what's right,' Jackson said.

One of the biggest gains for K2 veterans has been a House Oversight committee decision to declassify about 400 pages of information on the base.

'This will never be about money, but if money comes from recognition for the few that deserve it, so be it,' Jackson said.

'Every single person who knows anything about Capitol Hill told us it was too expensive,' said Jackson, who spoke at hearings and engaged lawmakers. His response: 'If you build two less F-35s, we'll be good.'

Jackson also said his grandfather served as a colonel in the Korean War and his father was a Vietnam veteran.

'I remember their complaints about how the government treated them. ... We've been in armed conflict with somebody since before we were a country. But we consistently forget the people who fought those wars.'