HANOI, Jan. 10 (Xinhua) -- Lao Prime Minister Phankham Viphavanh on Monday wrapped up an official visit to Vietnam from Jan. 8 to 10 to strengthen bilateral relations between the two countries.

In particular, the two sides agreed to continue the exchange of high-level and lower-level visits, effectively implement the agreements reached, and uphold their close coordination and mutual support at multinational forums.

The two prime ministers exchanged ideas on measures aimed at raising the level of economic cooperation and agreed to boost the connectivity between the two economies, especially via land-road, railway, aviation, and sea port projects. They also agreed to continue raising the quality of cooperation in other fields including agriculture, education and training, culture, sports and tourism.

Following their talks, the two prime ministers witnessed the signing of cooperation deals on security, border, economy, banking, education, health care, and electricity, according to the Vietnam News Agency report.

Together with his Vietnamese counterpart, Phankham co-chaired the launch of the Vietnam-Laos, Laos-Vietnam Friendship and Solidarity Year 2022 on Saturday and the 44th session of the Vietnam-Laos intergovernmental committee on bilateral cooperation on Monday.

During his stay in Vietnam, Phankham also met with Vietnamese President Nguyen Xuan Phuc and Chairman of the National Assembly of Vietnam Vuong Dinh Hue. 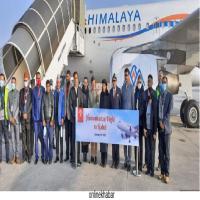