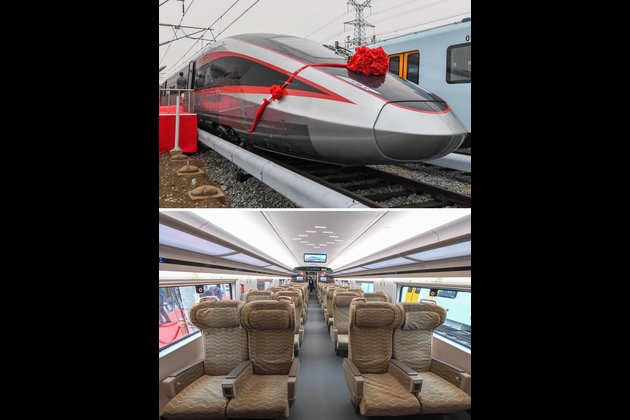 BEIJING, Oct. 22 (Xinhua) -- The world in the past 24hrs. A selection of the best daily press photos from Xinhua.

Combination photo taken on Oct. 21, 2020 shows the exterior (top) and interior of a new type of high-speed train which can run on different rail systems in Changchun, northeast China's Jilin Province.

The train, with a standard speed of 400 km per hour, was rolled out by Chinese train maker CRRC Changchun Railway Vehicles Co., Ltd. on Wednesday and has been developed to cope with different rail systems on international routes, making international rail travel more convenient. (Xinhua/Zhang Nan)

A vendor wearing a face mask waits for customers in Madrid, Spain, on Oct. 21, 2020. The number of COVID-19 cases in Spain since the start of the pandemic surpassed one million after the country's Ministry of Health confirmed 16,973 new cases on Wednesday to take the total to 1,005,295. (Xinhua/Meng Dingbo)

A man wearing a face mask walks on a street in Vienna, Austria, Oct. 21, 2020. (Photo by Georges Schneider/Xinhua)

Photo taken on Oct. 21, 2020 shows signs of the local COVID-19 alert level is high, at Blackwall DLR station in London, Britain. Another 26,688 people in Britain have tested positive for COVID-19, the highest daily increase ever since the pandemic began in the country, according to official figures released Wednesday. (Photo by Tim Ireland/Xinhua)

Flood victims stay inside a tent erected on a street side in Mongkul Borey district, Banteay Meanchey province, Cambodia on Oct. 21, 2020. Cambodian Prime Minister Samdech Techo Hun Sen said on Wednesday that flash floods in Cambodia have so far claimed 34 lives and forced the evacuations of tens of thousands of people. (Photo by Li Lay/Xinhua)

A man in wheelchair acting the role of a spectator heads to pedestrian screening areas during the screening demonstration test at Tokyo Big Sight in Tokyo, Japan, Oct. 21, 2020. Tokyo Organising Committee of the Olympic and Paralympic Games held a test of spectator and Games official screening measures on Wednesday, testing a number of different measures, including COVID-19 countermeasures, currently under consideration for deployment at pedestrian screening areas for spectators and Games officials during the Games. (Xinhua/Du Xiaoyi)

A malnourished child lies in a bed while receiving medical treatment at Al-Sabeen hospital in Sanaa, Yemen, Oct. 21, 2020. (Photo by Mohammed Mohammed/Xinhua)

The electric bus Yutong U12 from China is seen starting its first route in Athens, Greece, Oct. 21, 2020. (Xinhua/Marios Lolos)

A freight train carrying 100 TEUs of goods departs from Yiwu, east China's Zhejiang Province, for Minsk in Belarus, Oct. 21, 2020, marking the 1,000th trip by China-Europe cargo trains in the province this year. As of Wednesday, the China-Europe freight train service in Zhejiang has shipped 83,000 TEUs of goods, up 203 percent year on year, accounting for about 10 percent of the country's total. (Photo by Gong Xianming/Xinhua)