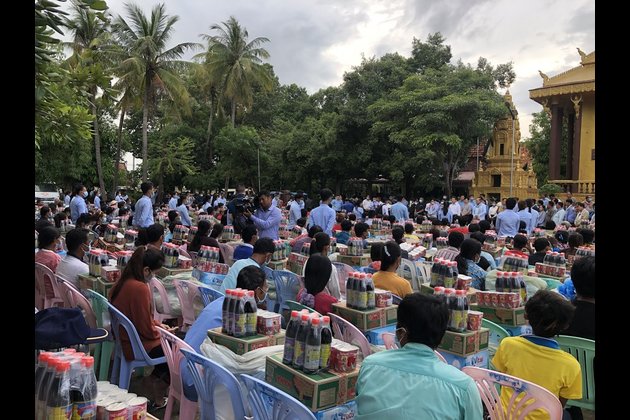 Each family received a relief kit of rice, noodles, tinned fish, soya sauce, drinking water and cash gift. "China always stands with Cambodia in all circumstances and we hope that Cambodia will soon recover from this natural disaster," said Chinese Ambassador to Cambodia Wang Wentian.

PHNOM PENH, Oct. 21 (Xinhua) -- The Chinese Embassy in Cambodia provided emergency relief on Tuesday to about 800 flood-hit families in Dangkor district in southwestern suburb of the capital Phnom Penh.

Chinese Ambassador Wang Wentian, joined by Cambodian lawmaker Hun Many, president of the Union of Youth Federations of Cambodia, and Phnom Penh governor Khuong Sreng, distributed the relief items at three different locations in the district.

Ambassador Wang expressed his sympathy to the flood victims, saying that the relief aid was not much, but hoped that it would help ease their hardships during such a difficult time.

"China always stands with Cambodia in all circumstances and we hope that Cambodia will soon recover from this natural disaster," he said.

The ambassador added that China will continue to help Cambodia restore its economy during the post-COVID-19 and post-flooding era.

Many extended his profound gratitude to China for providing the relief, saying that it truly reflected the kind hearts of the Chinese people towards the Cambodian people.

"A friend in need is a friend indeed," he said. "China's relief aid to flood victims today clearly shows that China is our true friend and always helps us in all difficult times."

Sreng said soldiers and naval forces, along with speedboats, have helped evacuate thousands of families in the district to higher ground these days and all of them are safe.

"The relief is timely and I believe that it will contribute further to deepening the fraternal friendship between our two countries," the governor said.

Flood victim Leang Sok Kong, 50, said the floods were the biggest-ever he had met since he had lived in the district for more than three decades.

"Floodwater in the year of 2020 is huge and it is at my waist-high at my house," the father of four children told Xinhua after receiving the relief.

He said the flood victims were really pleased to see Ambassador Wang visiting them.

"China always helps us whenever we are in difficulties," he said. "This is the first time I have got the relief from the Chinese ambassador. It will help ease my hardship in this difficult time."

Another victim Chhuon Samnang expressed her gratitude for the relief aid, saying that it would ease her family's difficulties for a while.

"I'd like to say thanks to the Chinese Embassy for donating relief items such as rice, soya sauce, drinking water and tinned fish to the people in my district," the 40-year-old mother of two children told Xinhua. "I'll never forget this kindness because it's the first time I've received the relief."

Cambodian Prime Minister Samdech Techo Hun Sen said on Wednesday that flash floods in Cambodia have so far claimed 34 lives and forced the evacuations of tens of thousands of people.

"I would like to take this opportunity to express my profound condolences to the bereaved families for this great loss," the prime minister said.

The flooding is another trouble for the kingdom, which has been suffering from the impact of the COVID-19 pandemic, Hun Sen said, adding that the costs of damage from the natural disaster have not been estimated yet.

Seak Vichet, a spokesman for the National Committee for Disaster Management (NCDM), said on Monday that seasonal rains, exacerbated by tropical storms, have caused floods in 19 of the kingdom's 25 cities and provinces since the beginning of the month.

Also, the floods have inundated 73,720 houses and 293,177 hectares of rice and other crops, the spokesman said.